(He fought the good fight)

"I have fought the good fight, I have finished the race, I have kept the faith"  2 Tim 4:7

Senior Pastor (Apostle) Kenny Ogunji (1962 - 2015) was inspired by God to start Word of Faith Centre, (WoFC) in Luton in 1991 and Bedford in June of 2006. He was recognised as a Man of God who believed that 'with God all things are possible', Mark 9:23. He was a gifted teacher of the Word, preacher, and often moved in the prophetic gifts and gift of healing.

His passion for Christ translated into his love for God's people. To this end he worked tirelessly to support, nurture and disciple others. A meticulous worker, he wrote a Discipleship programme (levels 1-4) for all WoFC attendees and authored a weekly devotional: Food for Thought all designed to ensure Christian growth which is founded upon the Word of God and not the opinion of man. He has left notes for a second book entitled: Forgiven to Forgive, a subject about which he was passionate.

He believed in strong, God focused leadership and ran an eldership programme designed to support the training of pastors, elders and youth leaders to be used of God in the church and beyond. He believed in accountability.

Beyond Word of Faith Centre Pastor Kenny engaged in encouraging other ministers, worked with other churches, the local council and police in Luton to introduce Street Pastors to Luton and also worked full time as a senior professional for General Motors, U.K.

A word from Marcia Ogunji

On Behalf of the Ogunji and Word of Faith Centre family

I want to take this opportunity to say a massive thank you to all who supported the Ogunji family and specifically Pastor Kenny with prayers, cards and love gifts. He had a health challenge for over 14 months; he fought to overcome and there were many miracles along the way. Even on the day when he slipped away to be with the Lord he received healing in his lungs. My beloved husband taught us to never allow our experiences to define God, I want to encourage you dear reader to thank God for Pastor Kenny's life, apply the lessons which you have learned about God under his ministry and trust God, His Word never fails, we just need to trust Him. Remember He is The I AM, His vastness and wisdom exceeds our understanding.

With love and appreciation

Precious child of the Most High, please take time, to begin with, to meditate on the following life changing, obstacle-destroying, and destiny-shaping scriptures. Please DO NOT let them get away from you for they are LIFE and HEALTH to your body... Click image below for scriptures. 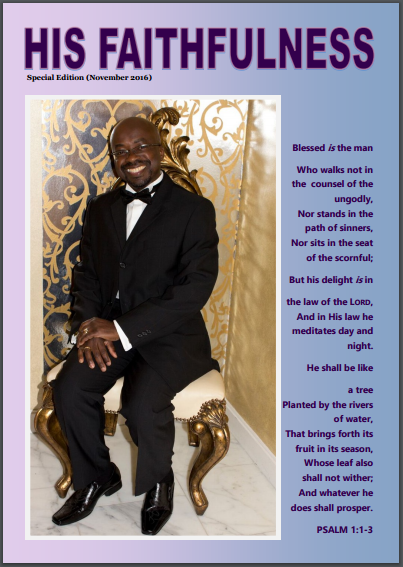